Working with wood; a Gypsy tradition 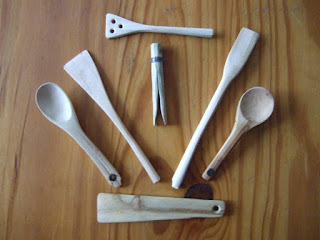 Photo description: Bottom: Veshtike Rom spatula, Left to Right: Bertike style spoon (oval bowl), Romanian Roma spatula, traditional Gypsy clothes peg (clothespin), Veshtike Rom stirrer, Veshtike Rom spoon (round bowl), Top: Honey/jam spreader (jam spreader does not, actually, have holes)
The Romani People (Gypsies) have had a knack of making a living from many activities in which they used the materials that were and are found in the environment around them, be this wood or others. Some of those activities today have died out, others continue, such as spoon carving and basket making.

Carving spoons, and the making of other kitchen and household items from wood, is just one of them, another is making baskets from osiers (thin branches), grasses and such.

Neither of those activities are invention of the Romani People, that is true, but the Rom carved – pardon the pun – themselves in many places a niche here and then, later, also in the recycling field well before recycling was even cool and a word.

The various different Romani groups, when it comes to carving spoons, and other kitchen utensils, developed their very own styles which, for instance, differed from the styles of the general Russian (and other) spoon carvers and also those of the Scandinavian ones.

On the other hand, however, the Romani craftsmen and even -women, created many of their own designs of spoons and kitchen utensils from wood, such as the stirring woods and spatulas, which are so very different from those that are found in Western Europe per se.

Designs and styles of the spoons vary too from group to group. The Romanian – and “Balkan” in general – spoon carvers make the bowls, while egg-shape, with the point towards the from while the Bergtike Rom in Poland have the “tip” of the egg towards the handle and the Veshtike Rom spoon has a more or less round bowl, similar to those of the Doukhobors (a Russian sect).

It was also the Gypsies, the Rom, who seem to have been the first, though whether it can be proven is another question, to have created the clothes peg, or clothespin, as our American cousins call it. When exactly the current design of the Romani clothes peg, and with that I mean the one made from a stick and banded with tin, has come about I cannot say but it will have been, I should guess, when strips of metal could be found or made.

When it comes to the Gypsy clothespins there are then also at least two design variations, at least among the Romani People in Western Europe, both Sinti relations. The Romanichals in Britain, and from Britain, use a strip of tin, which is affixed with short nails (pins) near the top end, in general, while the Manouche in France tend, at times, to use wire which is wrapped around and tightened with pliers of sorts. The latter version has a slight safety issue in that there tends to be a little bit of wire sticking out to the side.

Among the designs of wooden kitchen tools designed and made by the Rom craftspeople are many that have never been known before as such. The ever so useful stirring wood (stirring paddle, or stirdle, as I have termed it) is just one of them, as is the rather narrower trapezoid shaped spatula, narrower than the traditional Western European spatulas, both of Rom Polska origin apparently.

Other wooden articles were also made by Romani woodworkers and the wooden flasks that were so very common in Romania were, in general, made by very skilled Rom on a foot-powered lathe. Alas, today, there is probably not one maker left and those that are turned out today are badly made in factories.

“Wood, Leather & Recycled” produces wooden spoons and other wooden kitchen utensils, plus some other wooden and carved products, including also Gypsy clothespins.

Autumn season in the garden 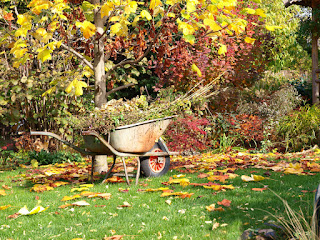 It’s time to pack away the flip-flops and bring out the boots, scarves and gloves. Temperatures will soon be dropping, meaning gardens and outdoor areas will need to be adapted to the new conditions. Preparing a garden in advance of the season changing will give certain aspects such as plants and shrubbery time to settle into their adjusted environment as well as offer gardeners peace of mind when the cold creeps in.

With increased wind speeds and colder temperatures, outdoor spaces will soon be covered in leaves and debris from trees. While you may be tempted to sweep them up or even blow them away with a power-blower the thing to do it, at least wherever possible, to leave them be. Better for the wildlife and the garden itself too. Where you do wish to remove them sweep them up, put them into bin liners and in no time you will have great leaf mold to add to your garden beds.

Get ahead of the weeds

In the summer, seeds will have landed in and around outdoor areas and they will eventually develop into weeds and you may well be tempted to apply weed killer to the garden to keep on top of the initial growth. However, weed killer – more often than not glyphosate – is not a sustainable and ecological way to go and even so-called “safe” alternatives, such as the use of vinegar and such like are not as safe as promoted.

To be perfectly honest the best and greenest way to manage weeds in your garden is doing it the old-fashioned way, that is to say manually. Even the often recommended green way of using vinegar is not a green way.

Keep an eye out for damaged hedges and trees

Prior to wind speeds picking up, checking any branches, trees and hedges could be vital for people’s safety in the garden. If any appear damaged or are starting to rot, they can potentially blow off and cause damage to a property or even harm a person.

Should a tree be on the boundary of your property where, especially, the public might pass by, then ensuring that there are no branches that could, potentially, cause a problem to passersby is extremely important because, theoretically, any branch falling and possibly injuring someone could leave you open to litigation. If you can prove that you have taken all possible precautions to avoid such you might just about be in the clear in case something does happen.

In addition to that clear the beds – especially the vegetable ones – of plant remains and prepared the soil for the winter and the next growing season by adding leaf mold and compost, spreading a layer of about two inches at least. Do not dig or fork this in but leave the worms to do their business by carrying the nutrients down into the soil while at the same time aerating and loosening the soil. Come spring just sow or plant into the beds without further ado.

Normalize Repair. All forms of repair 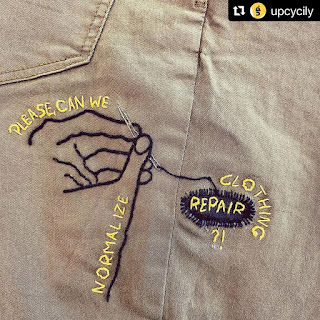 Although, presently, we still mostly associate wearing mended or repaired clothes with poverty and not being able to afford something new, I firmly believe that together we can change this stigma and introduce something new; loving and caring for our clothes, and other things, as an action and conscious choice to save our Planet and stand up against wasteful and unethical "norms" in our society and the industry.

It was not really than long ago that repairing clothes and, obviously, other things was the norm, and not just for those on the lower end of the scale, and patches on the knees and elbows were common. To mend and repair was also cheaper than buying new and that was important to almost everyone but especially those not so well off. But when it came to kids almost everyone had mended items of clothes. You'd grow out of them anyway in due course. But that was before “cheap” clothes and “fast” fashion.

When I see how people actually deal with clothes today it makes me shake my head in disbelief. Anything from hats, including woolly hats, over T-shirts to coats are being left behind, children's and adult's, in parks, for instance, and no one even as much as inquires made as to whether they have been found and taken in. Aside from that not that very old, in other words almost new to actual new, children's scooters and bicycles, for instance. And the same in those cases in that no one actually asks whether they have been picked up by staff. Some people have far too much money and absolutely no sense. No wonder they can't make ends meet when they behave like that.

We have become such a “throw away society” that it is almost beyond belief and this attitude reflects also on and in other aspects of society and life. Nothing is valued anymore, not even, at times, life itself.

Hopefully repair, the normalization of repair, the way it once was, can be part of our future again and that cannot come soon enough.

But in order to achieve this, we have to talk about it. Buying and wearing secondhand clothes is cool (pardon that phrase), repairing your clothes the same, and the same goes for wearing the same outfit again and again.

However, we also have to acknowledge my privilege here that many of us are able to choose to repair our clothes and buy and wear secondhand by choice. Some people do not have that choice. They are forced to by circumstances and it should not be a stigma to attach to them.

This normalization of repair does not just go for clothes. It should and must go for everything that we have and also simply keeping those things that we have that still work in good order instead of buying new just because we can or because a new version of the product has come onto the market.

Furnishing a home with secondhand is also something that falls into this department and everything, bar a couple of things, are fine when purchased secondhand; mattresses are one of the few items that best are not obtained secondhand, for reasons of hygiene.

While this was and is very much the domain of those that are the poorer in society it would do the Planet no end of good if we all looked at that a little more. Then again, on the other hand, if we all did it secondhand might be priced, by the unscrupulous traders, out of the range of the poorer people.

And, most import of all, whether as regards to furniture or all other things, is to no longer treat things as “throw away” items, even if they were not all that expensive, look after them somewhat more (again) and make them last by, if something happens, repair wherever possible.