A political party that openly has members with right-wing links and whose candidates make statements where they claim that the Jews brought the Holocaust onto themselves deserves to be banned, in the same way as the BNP and others of its ilk do.

But the excuse it that we have democrazy and therefore those parties have a right to exist. They do not.

In Germany the NPD, which is basically the successor party of the NSDAP, Hitler's National-Socialist Worker's Party, though claimed by some to be but a fringe party (it is not), is allowed to exist while the DKP, the original German Communist Party has been outlawed even after Hitler, and so has been the SED and the FDJ. Any and all attempt to ban the NPD has, so far, been blocked by the claims that Germany is a democracy and the party has a right to exist. What about the other parties and groups then?

The fact is that the powers-that-be want those fascist parties to exist so as to create a reason for themselves to enact legislation that are basically fascist in nature as, so they claim, based on the popularity of some right-wing policies, the people demand such actions.

The stance of UKIP can be seen in the fliers that have been used for the local government elections in May 2013 by them and one of them is presented below. 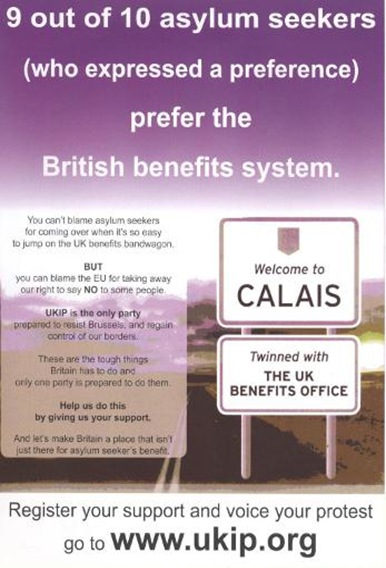 The tactics are the same that are being employed by those behind the Daily Mail so-called newspaper, which is everything else but a newspaper, in their headlines that claim that everyone from Romania and Bulgaria is going to come to the UK now that they can, theoretically, in order to claim benefits and to take UK worker's jobs.

While the mention is of Romanians and Bulgarians the real target, in the same way as are recent statements by the German Minister of the Interior Hans-Peter Friedrich, are not Romanians and Bulgarians per se but the Roma in their midst. And this despite studies that show that very few from those two countries have even the slightest intention of immigrating to the UK.

However, it makes for great political capital and for aiding and abetting the government to impose even greater restrictions on the people of the country.

The British government has hinted that it will reduce the benefits and access to them even for citizens and legal residents in order to be able to discourage, so their claim, members of those two countries to come to the UK.

Here we can, once again, see how the powers-that-be make use of the supposed clamor of the people whipped up by false claims in the media and by parties such as UKIP and the BNP for their own ends so that they can say that it was, after all, the people that demanded those steps.

It makes no difference as to whether UKIP deselects and suspends members and candidates that have right-wing tendencies, and make statements such as did that certain female candidate who said that the Jews brought the Holocaust onto themselves, or the candidate for Kent, England, who called for the compulsory abortion of all disabled fetuses.

Despite the fact that he has been suspended from the party the candidate for Kent, Geoffrey Clark will still stand in Thursday's election, as the election ballots have already been drawn. The latter is an absolute farce and should not be allowed to happen.

The entire party needs to be thrown onto the garbage dump (but then again that would be pollution of the environment) and I say that despite the fact that I have no time whatsoever for the European Union.

UKIP's aim is not only to get the UK out of the EU. It's aim, so it would appear, is to create a fascist and racist country that will be not just anti-immigrants but anti-Jews and anti-Gypsy and anti every other ethnic group.

While I am all for getting rid off people that should not be here and which pose a threat to the security of the country, such as a certain Muslim cleric who even has been disowned by most Muslims in this country, immigrants have given much to this country in the same way that they have to the United States.

And when it comes to threats against the security of the country the fact that British and American troops are in certain countries involved in illegal wars and now flying predator drones from UK soil is much more a threat to the security than any person already on the radar of the security services.

We need a new system, not a new government. Neither Labor, nor the Lib-Dems, nor the Tories, nor any other party, will ever give us what is needed. Only a new system will do so; not another set of new oppressors.