The myth about the FEMA concentration camps

Time and again the scaremongers, with the likes of Alex Jones and his ilk in the forefront, try to make the people buy into the stories of FEMA concentration camps, FEMA coffins (because the US government wants to kill so and so many people), etc. and those people then claim that this or that location is the site of one of those camps. 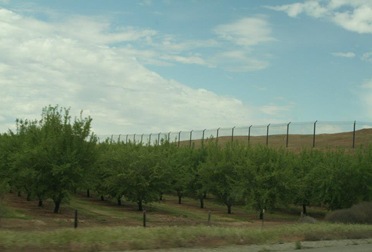 Just like this facility along the Ca. I-5 which has been claimed to be a FEMA concentration camp and the conspiracy theorists like Alex Jones and others, have claimed that the large over 30+ foot tall fence is there to keep people in.

There is just a slight problem with this particular site and location that that this is the fence surrounding the Fink Landfill at Lat. 37°23'23.69"N Long. 121° 8'15.24"W. The fence is there to keep trash from blowing on to the Interstate and not to keep people in.

Other sites that have been reported to be such camps do not even exist and were, it would appear, created by the scaremongers to make their little videos and photo series. All in order to sell guns, ammo, and other “survival” supplies to those that they manage to scare.

A fair number of years ago now others in the same fraternity as Alex Jones brandished about photographs of supposed joint US/Russian checkpoints with signs in Cyrillic and English. It is just such a shame that those who made up the sign did not know that just writing “Stop Checkpoint” in Cyrillic does not make it Russian.

The there was the “scare” of the Warsaw Pact UN vehicles at a staging yard in the southern USA, claimed to be readied for a UN takeover – using Russian forces – of the USA. Shame that this was just a used car lot of ex-East German military surplus vehicles bought by a car dealer. But, one cannot let the truth get in the way of a good story now, can one?

Oh, and while we are at it let us also look at the Chemtrails which are, according to many of those scaremongers, chemicals being sprayed to kill us all. Right you are! And that would also mean that the powers-that-be would breathe in the same chemicals and they also would be in danger.

While there is some aerial spraying being conducted, predominately in the USA, which is an attempt to control climate change, the absolute great majority of the so-called chemtrails are in fact nothing more than aircraft contrails. The latter are by no means harmless as they cause a type of cirrus cloud scatter that does block out sunlight and thus cause changes on the ground.

But in order to get rid off those trails and the resultant cirrus clouds would mean to reduce aircraft use and that would mean for most people to fly less. Something that I think will not goo down well with those that wish to jet off on vacation every so often to sunny Spain, or for skying to the Alps, and such like.

Contrails have been around ever since we have jet aircraft and even before. The sky over England was crisscrossed with contrails during the Battle of Britain and that by the contrails from the Spitfires, Hurricanes and the German planes.

Today's crisscrossing contrails are not because planes fly back and forth to create a grid, as the scaremongers claim, but they are from aircraft flying at different altitudes and if looked at properly in the field this can be seen though on photos they are often made to look as if they are a grid.

We have had attempts of weather modification by use of “chemicals” for many decades by now already, predominately in an attempt to make it rain, using silver iodine. Cloud seeding it was referred to and it is still going on. The rain created by this method, when it is successful, more often than not, however, is not very useful as it comes down as a deluge. Man cannot control weather very well and the HAARP they try to play at times does not do too well in that department either.

I would be more concerned about the facilities under the US legislation that allows for the indefinite detention of people, including and especially anti-government Americans, that are being created on US bases in the States.

FEMA could not organize a proverbial in a brewery, as was evident from the Katrina aftermath fiasco, but the US military is more than capable of doing it and if there are any camps then they will be on existing military facilities. So, don't worry about an old railroad yards, or a landfill, or a water works.

But what you need to worry about is the agenda that those scaremongers are pushing and especially in this department Alex Jones and some others. Who are they really working for and what is their beef?

So far all FEMA concentration camps that they have ever claimed to exist were fakes and the same goes to the checkpoint signs and such like.

“STOP CHECKPOINT” in Russian reads “ОСТАНОВИТЬ КОНТРОЛЬНО-ПРОПУСКНОМ ПУНКТЕ” and not “СТОП ЖЕКПОИНТ”. And there is just a slight difference. But that is not something that the ordinary punter would know and thus the scaremongers get away with it.