Police raid Kansas family's home because they had an indoor garden 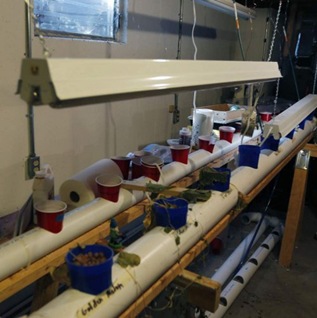 LEAWOOD, KS : Men with assault rifles raided a family who had been growing tomatoes and melons under grow-lights. The government agents thought that was enough probable cause to believe they were growing forbidden plants inside their home.

"It was just like on the cops TV shows," Robert Harte told the media. "It was like 'Zero Dark Thirty' ready to storm the compound."

Apparently all it takes to get raided is buying hydroponics equipment and materials for indoor gardening.

Dogs entered the home. The armed agents belittled the family and implied that their 13-year-old boy was growing marijuana in the home.

"If this can happen to us and we are educated and have reasonable resources, how does somebody who maybe hasn't led a perfect life supposed to be free in this country?" said Adlynn Harte.

The real interesting thing is also that the Hartes both are former CIA employees and know their way around the law and the Constitution and have filed a law suit against the authorities.

One can but hope that their law suit will be successful and that the agencies responsible get a nice rap over the knuckles and the government has to pay a nice amount of compensation to the family that they so illegally raided.

Many of the American Alphabet Agencies are riding roughshod over people and the people's rights supposedly protected under the Constitution in an apparent belief that they, the agencies, can do as they please and that the rules of law do not apply to them.

In the same way that the Bureau does not seem to understand, and the other Federal Agencies, that they have absolutely no jurisdiction in any state, county or town, unless grated to them by the local law enforcer, and in town or county, this more likely, will be the sheriff.

If they do not first come to him (or her) then they are, according to the Constitution, are the law breakers and any sheriff worth his salt should run them out of the town or the county, and some, who understand their roles and rights, have done so before.

It is time for the people to reclaim their country and their rights...