Spring has sprung or is about to and foragers will be out in force again, even though foraging can be done also during the winter months, though the bag is smaller and has less variety.

But aside from the good to eat wild plants, which we often also, especially when they turn up, even if edible, in our gardens, as weeds there are poisonous ones growing right among the good ones often. 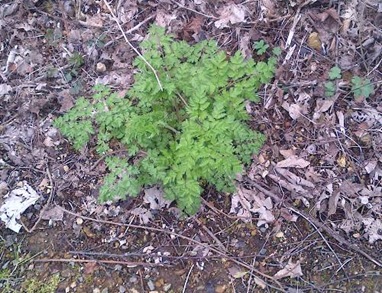 The wary forager should certainly know his Hemlock. This plant is extremely common throughout Britain and seems to have settled in quite nicely in many areas of our parks, woodlands and general countryside. In some places it creates a literal carpet and spreads all over the place.

It is chiefly notable to the forager for bearing similarities with wild carrot and other wild umbellifers. As luck would have it, however, it does not smell at all carrot-like but rather like something nasty, which it is.

The main distinction is the purple blotches on the tall stems of the flowers, but in spring time those are not grown and the rosettes of young hemlock lurk and loiter among the nettles and hedge garlic where consumers of leaves are likely to be rummaging. Only later on, toward summer, the telltale stems with their purple splotches will appear.

Hemlock is principally famous for putting a sad end to Socrates, and it is deadly poisonous and even a very tiny piece of it in your salad is not healthy at all. Therefore please watch out for it.

As they say on so many instances, “if in doubt, leave it out”, and this is very good advice here. In fact you do want to leave it out. It will kill and, as said, it takes but a very small amount. A little like the death cap when a piece of it finds its way into a mushroom soup only that hemlock works faster.

As with everything know what you are gathering for your table and if you are not 100% certain that that plant is the right one then leave it where it is.

If you have some real favorites among the wild foods and edible weeds why not then actually grow them in your own garden. That way you know for certain what they are, where they grow, that they are free of dog, fox or other urine, and you also don't have to travel far to harvest them. This is, in fact, something that I am doing and will be doing a lot more of.

So far I am growing dandelion, chickweed, sorrel, wild blackberries, narrow-leaf plantain, sorrel and stinging nettle in my garden and hope to be adding – hopefully it comes come up again – lamb's quarter, and ransoms. And others are also being considered. Weeds seem to do much better than cultivars and thus I am going to go down that route.

Also better to have that all close to home than having to do field trips for it all.