Toys of old for the new age

Spinning tops, and wooden blocks, Yoyos and the rest 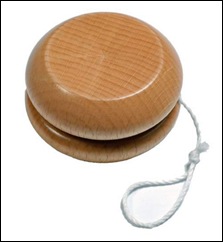 Too many modern toys and games do not allow kids any real freedom to play as they are preprogrammed – the games not the kids – to certain actions and more often than not also in such a way that the computer wins most of the time.

In addition to that too many of those modern toys can only be used with batteries and are not very high on the sustainability scale and radar.

Wooden toys and old-fashioned, if I may call them that, games, and more modern ones based on them, such as Bananagrams, which is like Scrabble without the board and the values on the tiles, allow much more freedom and flexibility and, which is also rather important, work when and where there is no power, not even batteries. They need none.

In the last couple of months or so I have seem a great number of “traditional” and not so traditional, toys and games that do not need batteries and allow room for children's imagination.

Games not needing power and not screen-based and wooden toys, whether spinning tops, yoyos, or others, and some in heavy plastics even, maybe, too, are much more sustainable and better for our children than the others.

Sustainability, when it comes to toys of this nature, also must not just be in regards to materials but also mode of manufacture, as well as place of manufacture, so to speak. We must look at those that are made locally predominately – and yes, they can be had – and not “Made in China”.

When one looks at what most companies put on the market and then spend millions – literally – on marketing the stuff to children directly or via their parents it is amazing as to how stupid the world seems to have become.

Kids would never ask for that stuff, much of which will break very soon, were it not for the clever marketing. They want something, if offered, with which they can use some skills or their imagination.

We do not seem to have advanced at all. Rather the opposite. However, to this very day I fondly remember that old wooden tractor of my childhood that got repaired over and over again. I still wish that I had kept it.