Watchdog goes a-hunting because of one or two complaints 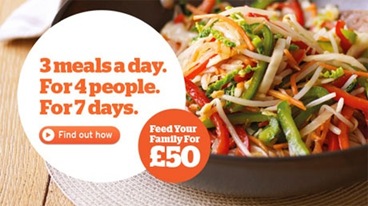 An ad for Sainsbury’s Feed your Family for £50 offer has been banned after regulators ruled it was misleading.

The ad campaign, which ran on TV, online and in print almost a year ago, pushed its seven-day menu which claimed to provide a family of four with three nutritionally balanced meals a day.

A handful of consumers complained that the promotion was misleading because the menu did not provide sufficient calories to meet the needs of a family of four, and that additional food would have to be purchased.

The menu plan was not suitable for children under four but the ad campaign showed children in their age group, according to complainants.

Complaints were also lodged that the menu also included a number of “store cupboard” items that would also have to be purchased in addition to the £50.

Sainsbury’s said that its meal plan, had been “deliberately engineered” not to provide all of an adult’s calorie requirements to allow for additional snacking or drinks outside of the three meals.

The supermarket added that the meal plan was devised with the British Nutrition Foundation in line with the Department of Health’s nutritional guidelines and provided five portions of fruit and vegetables each day and 85% of the guideline daily vitamins and minerals.

The watchdog ruled that Sainsbury’s had “over claimed” that its menu planner could provide all of a family’s food needs for a week and not making it clear that additional snacks fell outside of the £50 budget, despite the Department of Health agreeing that Sainsbury’s decision to structure the meal plans to provide 75% of calorie requirements was “reasonable”.

The ads have been banned in their current form and the ASA advised Sainsbury’s that future menu planner campaigns should explain how the calorific content had been calculated.

Because “a handful of consumers complained”, who probably wouldn't have an idea about what constitutes a balanced meal anyway, but then we must consider that the USDA and the FDA in the USA have declared pizza to be a vegetable, an ad that promoted a better approach to eating gets pulled and the supermarket in question slated.

Thankfully the rest of society may just have enough common sense and reasonableness to be able to feed our families adequately, whatever our budget may be. Or am I hope for too much?

This was and is a great initiative by Sainsbury's to get the family eating three good meals a day and proving that you don't have to spend a fortune to eat well. And it proves that one does not need to default to junk if on a budget. Shame the ads got pulled, as they send out a strong message.

Sainsbury’s should be congratulated for their efforts on this front and the recipe cards that they used to have – and still do – are a great resource for those that have little or no knowledge, and those are legion, of cooking a meal from (almost) scratch.

Too many people, as said, have no idea about cooking from scratch and thus cannot make heads or tails of a recipe anyway. And, because they have nothing better to do they go an complain to the “authorities”. Get a life people...