Real Bread lovers say ‘not in my loaf!’

The Real Bread Campaign, GM Freeze and the Bakers, Food and Allied Workers Union delivered an anti-GM wheat pledge from more than 350 bakers, millers, farmers and consumers from around the UK to Defra. 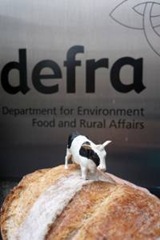 This was accompanied by a letter to Caroline Spelman MP, the Secretary of State for Environment, Food and Rural Affairs, expressing deep concerns about the testing of GM wheat at Rothamsted Research in Hertfordshire.

Pledge signatories stated that they:

People wanting to read and sign the pledge can do so at www.gmfreeze.org/actions/24/

A march on Rothamsted Research has been organised by www.taketheflourback.org for 27 May.

Ian Hodson President of the Bakers, Food and Allied Workers Union said: ‘Our members feel that there are too many unknowns and risks associated with GM food. We believe the health and wellbeing of people should be put before profit, and people have the right to know what's in their food. GM foods should not enter the food chain until it is proven beyond doubt there are no associated risks. GM crops have been heralded as the future by some, but previous experience tells us that such promises need to be very carefully scrutinised to before allowing them to enter our environment and food chain.’

GM Freeze published a review of research projects showing how farmers can manage their farms to attract predators and parasites of aphids to make ensure the pest never reaches numbers that would reduce yield from wheat crops. This can be found at: www.gmfreeze.org/publications/briefings/127/

Pete Riley from GM Freeze added: ‘This is the beginning of a campaign to ensure our staple foods, such as bread, remain GM free. From what we’ve seen so far, shoppers who don’t want to support the GM industry should go local – we’ve had a great response from local bakeries saying they won’t use GM wheat, but bigger companies have so far been much more reluctant to confirm this with us.

GM wheat would have a profound impact on the food chain because of the constant threat of contamination from seed to plate. Research in this country shows that we don’t need to use GM to control aphids in wheat if our farm management encourages the many species of insects and spiders which naturally control them. This approach simultaneously provides habitats for other wildlife, like pollinators and farmland birds, making our farms healthier places.’

Leonie Nimmo from Ethical Consumer commented; ‘Open air trials of GM wheat threaten to eliminate the right of consumers to choose non-GM wheat products. GM crops have been proved to contaminate non-GM sources time and again. Supermarkets are well aware that British consumers have rejected GM crops and that the more GM food is in circulation the harder it is to guarantee uncontaminated supplies. They need to respect the wishes of their customers, not only to keep their supply chains GM-free but to pressurise the government to halt these trials.

Consumers have shown no desire to eat GM crops in the past, which is reflected by the lack of GM products on sale in the UK’s retailers. Supermarkets need to respect the wishes of their consumers and keep GM wheat out of their supply chains.’

Part of Sustain: the alliance for better food and farming, and funded by the Big Lottery Fund’s Local Food programme, the Real Bread Campaign is helping the rise of additive-free local loaves, and finds ways to make bread better for us, better for our communities and better for the planet.

This press release is presented for your information only.

Full Disclosure Statement: The GREEN (LIVING) REVIEW received no compensation for any component of this article.

This article is for your information only and the GREEN (LIVING) REVIEW does not (necessarily) approve, endorse or recommend the product, service or company mentioned.