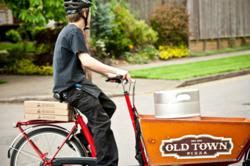 Old Town Brewing Company was recently launched by its sister company, Old Town Pizza. The famous Portland Pizzeria has already been delivering pizza throughout the city by bike for nearly eight years.

Established in 1974 with the opening of its original landmark location in Old Town’s Merchant Hotel building, Old Town Pizza is a Portland legend known for its incredible pizza, cozy atmosphere and bustling happy hours. With two locations and a new brewery, Old Town Brewing Company, the Portland Business has garnered attention from shows like Rachael Ray’s Tasty Travels, The Tonight Show, and The Travel Channel. "An icon, a must, something to check off your To Experience Before You Die list," says Portland Picks.

This press release is presented for your information only.

Full Disclosure Statement: The GREEN (LIVING) REVIEW received no compensation for any component of this article.

This article is for your information only and the GREEN (LIVING) REVIEW does not (necessarily) approve, endorse or recommend the product, service or company mentioned.