Has the End of Oil arrived? 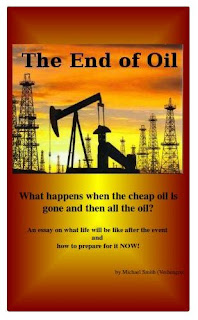 It would thus appear that my recently published small tome entitled “The End of Oil” is a very timely arrival then.

In February 2010 the UK Industry Taskforce on Peak Oil and Energy Security (ITPOES) published a report entitled “Oil Crunch” (http://peakoiltaskforce.net/download-the-report/2010-peak-oil-report/) where they seems to be running rather scared of the prospects of us all running out of the black and sticky stuff.

Now, in the beginning of July 2010 it was announced, and even though it went across the wires the media the world over stayed stumm, that the King of Saudi Arabia has ordered and end to all oil exploration in the Kingdom (http://community.nasdaq.com/news/2010-07/has-peak-oil-arrived.aspx?storyid=29215).

While he claims that he did this in order to preserve some of the oil and its wealth for their children and grandchildren it would appear that the truth might be somewhat different and they do not want to let the world know that there is, in fact, none of the black stuff left.

However, it is a known fact that Saudi Arabia's oil wells are nigh on empty, totally and thus this exercise is somewhat futile. It also means that the biggest producer has run dry and that means oil will, inevitably, go up in price once again and this time it, more than likely, will stay high and go higher and higher.

The USA has had a Congressional Peak Oil Caucus for many years already but very few people seem to be aware of this and few in Britain, I am sure, have been aware of the fact that British industry has one of those things as well.

While it may not be a governmental one as in the USA the fact that British industry – and the guys involved are not on the fringes – is having a Taskforce on Peak Oil and Energy Security should tell us something.

The great majority of people in Britain have been thinking the people in the Transition Movement slightly bonkers with their talk, like myself, about “Peak Oil” and needing to transition to a post oil age world.

The fact that industry is taking the issue of “Peak Oil” and us running out of it very serious indeed should be a wake-up call to everyone who is still sleeping or slumbering.

We better get used to the fact that soon the car will become part of history in the same way that the dinosaurs did and that we will have to go back to other ways of transportation, including walking, cycling and the use of the horse, as riding animal and propulsion for the carriage. So, it is a return from the horseless carriage to the horse-drawn one.

Peak Oil also is becoming more and more now something that the mainstream media, such as BBC Radio 4 is beginning to talk about and a very interesting research on this was done for iPM by Hugh Sykes, broadcast on Saturday, July 24, 2010, and the podcast can be had via the BBC Radio 4 website under iPM.

There are still some ultimate optimists about though, such as Physicist and Mathematician Michael Soper who, basically, claims that the oil will last for ever. I am afraid though that those are rather misguided and hearing Mr Soper I must say also live in somewhat cloud-cuckoo land.

It is an established fact that all our fossil fuels are finite and the warning against basing out economy was given already in the last years of the 19th century by scientists then.

More coal and oil has been found since but, the other point is that we are not, in fact, running out of all oil that exist on Earth; just out of the stuff that can be cheaply and cost-effectively be gotten out of the ground.

My book “The End of Oil” can be purchased via http://the-end-of-oil.blogspot.com/. I am sure that this will be £3.95 for an E-book well spent.