And, yes, it is indeed a scam! 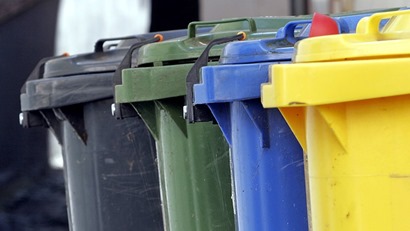 We are encouraged, nay pressured even, to clean and nicely separate all our recyclables – glass, plastic, paper, etc. – into bins for the different ones. But what really happens to those “recyclables” that our municipal refuse services pick up from the kerbside? Often, actually, nothing more that being dumped in the same place where all the other refuse, all the other “waste”, goes; the landfill.

Most municipalities do not have the expensive sorting facilities and in more than half of all cases – if not at times in 90% of them – the collections are all but for show, more or less.

Reuse is much better but most people just cannot think what to do with this or that item of “waste” (waste as a resource) as our mindset, at least that of the great majority, is to buy rather than to make.

This thing about recycling is that it is a crutch to those not wishing to think about the above and as far as our governments are concerned it is a means to blind people into believing that the government and industry care about the Planet. Capitalism never will. The main reasons that many recyclables – aside from the financial costs of sorting centers – are landfilled are at least two-fold.

One is market related and has to do with the over saturation of recyclables meaning that the price ends up so low that separation, even if collected through kerbside collections where we have done much of the sorting already for them, and shipping the stuff out just is not cost effective.

The other is that households and businesses still do not understand that the recyclables have to be clean. Just one wrong item of cardboard, for instance, say one that is greasy or whatever, in an entire container means that all of it gets tossed. Again due to the processing centers not being there and it being expensive to actually do the separation, especially manually.

So municipalities go through the motions of collecting our recyclables – for it looks good to be seen to do it – but then due to low prices on the world market, or whatever, nevertheless, landfill them.

Many of the recyclables – most of them in fact – if they don't get landfilled are not processed “at home” but are shipped to China, or, in the case of appliances, computers and such, to some third world country to be processed, and in the latter case under very polluting conditions and even in China the environmental protection standards are much lower than in Europe or in the USA. So we also export not only our recyclables but also the pollution and poisons that go with the processing of them.

Recycling is also very energy intensive and while, if recycling is done properly, it still saves raw materials and some energy in the processing, the kerbside collections, the shipping to port, the transportation across the oceans, etc., uses lots of energy and creates emissions and pollution.

We must get away from this fig leaf and have products made that, one, last, two, that can be easily repaired and, three, that at the final end of their lives can be reprocessed “at home”.

What can we do?

The first step to waste reduction and avoiding the recycling scam is to use less stuff, to try, when buying things to buy with less packaging or zero packaging, and to reduce our waste. It also means buying less (new) stuff especially when there is actually no need for it and whatever you have got is still working perfectly well and doing the job that it is meant to do.

Use what you have got

Instead of running off to the stores to get the next generation iPhone or whatever else stick with what you have got (as long as it works, obviously). The latest is not, necessarily, better than the old one that you have already got and the “bells and whistles” that the new version may have are, more often than not, something that you will never, ever use.

Reuse falls into two categories really. One of them is the continuous use by ourselves, or someone else who we have passed this or that on to, and the other is reusing what are often referred to as items of “waste”, as did our grandparents and their parents or in some cases even our parents still, or making use of what some other person has thrown out.

Repair is, obviously, simple as to what it means. The problem today, though, is that many products are designed in such a way that they cannot be opened and repaired. This is called built-in obsolescence. However, it is possible to “hack” a fair number of products that are believed, even by repair shops, if they still exist, to be non-repairable. In a time not so long ago everything was repairable and if it could not be done by the user then there were shops that could do it for a fee. But today it is getting more and more difficult to find repairers even for those things that can be fixed.

Now that recommendation, I think, is so simple that it needs no explanation. If you, yourself, no longer have use for anything then pass it on to someone who will (be able to) make use of it. If you don't know someone to pass it on to then donate it to a charity shop so that it will find a new home and may even benefit on other ways too.